Construction of Velocity Compounding Turbine with Diagram - Advantages and Disadvantages 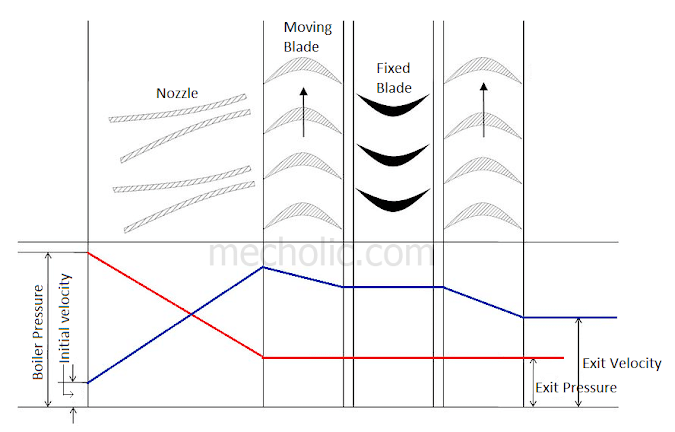 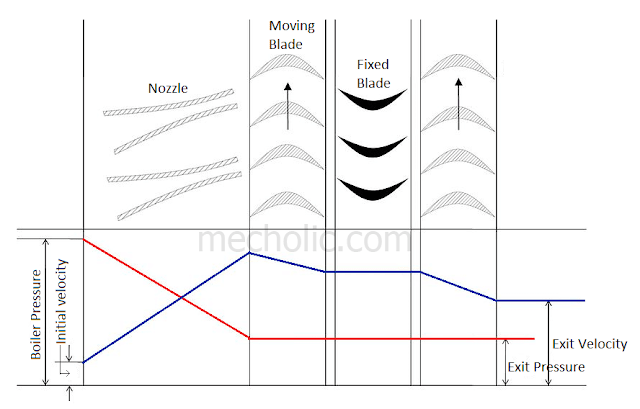 The above figure shows the velocity and pressure curve while working fluid passing through the blades of velocity compounded turbine. Here the kinetic energy (velocity) is extracted from working in multiple stages. This is known as velocity compounding.

Figure show the arrangement of a velocity compound turbine. The turbine has adjacent rows of moving blades and fixed blades. The moving blades are keyed to the same shaft. Here the working fluid is a steam. Initially, the steam from boiler having high pressure and low velocity is directed to moving blades through a stationary nozzle. The steam completely expands in the nozzle, as steam passes through the nozzle the total enthalpy drop and hence the pressure of steam drops. At the same time, the velocity or kinetic energy of steam increases according to the Bernoulli’s principle. The portion of the kinetic energy is then absorbed by the row of moving blades, impart a rotation on shaft. The velocity of steam is decreases and pressure remains the same while it passing over the moving blades. The steam is then pass through the fixed blades without any change in velocity and the pressure (the velocity will slightly drop in practical application). The purpose of fixed blade is to redirect the steam to the next rows of moving blades where again work is done on rotor with dissipating kinetic energy. Finally, the low-velocity steam leaves the turbine.

Advantages and disadvantages of velocity compounding