Essential Parts of Modern Carburetor and Their Functions | Mecholic

Essential Parts of Modern Carburetor and Their Functions 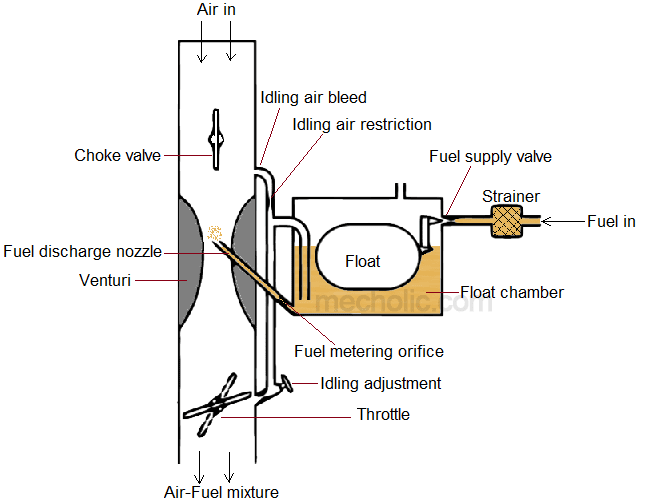 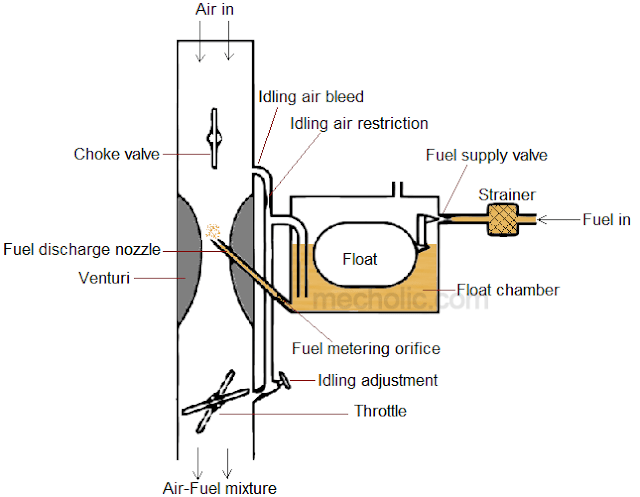 The modern carburetor has many essential parts. According to the functions they can be grouped into the


The functions of these parts in the carburetor is discussed below

Fuel discharge nozzle of a carburetor is very thin. It may get clogged during prolonged operation of the engine. To avoid the fouling, clogging of narrow discharge nozzle by the dust particle, the fuel is filtered using fuel strainer. In most carburetor fuel first enter into strainer chamber. Fuel strainer consists of a filtering method (usually fine wire mesh) and it will intercept dirt particles in the fuel. Fuel strainer is installed at the inlet of fuel chamber and may be cone-shaped or cylindrical shaped. strainer retained its position by using compression springs or strainer plugs. Fuel strainer is the usually removable type so that it can periodically take out and clean thoroughly. Now there are variety carburetor and choke cleaner solvents are available in market.

During idling and at very low-speed running of the engine, the throttle is in closed or marginally opened position. So very small quantity of air passes through the nozzle during idling produce very little pressure depression across fuel discharge nozzle. This pressure depression is not enough to suck fuel from the float chamber. In order to provide rich mixture during idling, most modern carburetors incorporate an idling system. It consists of idling fuel passage and idling port as shown in the figure.

In idling operation, the suction stroke decreases the pressure at the downstream side of the throttle, this pressure depression is enough to raise the fuel in the idling tube and discharge it through idling discharge port. A small amount of air is also sucked through idling air bleed, air mix with fuel (vaporize and atomize) as it passes through the idling passage. There will be some idling adjustment to regulate and keep the desired air-fuel ratio for idling. Bleed air also prevent the draining of fuel through idling tube due to siphon action.

When the vehicle keep stationary for long period, or starting of the engine in winter season may find some difficulty. At starting and very low-speed running engine require a rich air-fuel mixture for initiating and sustaining the combustion. Choke valves are used for this purpose. When choke valve manually pulled, it rotates an angle and restrict the air flow to the cylinder of IC engine and hence supply rich air-fuel mixture. Choke valve is usually a butterfly valve mounted in upstream of the carburetor. When choke partially closed it produces a higher partial vacuum inside the carburetor, which increases the amount of fuel flow from the main discharge nozzle. Opening of choke valve restores the normal operation of the carburetor. In modern design of carburetor the choke made works automatically by using thermostat and spring loading.

Throttle is the main valve that controls the engine speed. This valve operated by accelerator vehicle by using mechanical linkage or by using the pneumatic method. It locates at downstream side to the venturi. Throttle regulate the quantity of charge flow into the cylinder. The more throttle valve opens the more air-fuel mixture flow into the engine cylinder it accordingly increase the output of the engine. When throttle is closed partially, it create more obstruction to charge flow in to the engine and reduces the engine output.