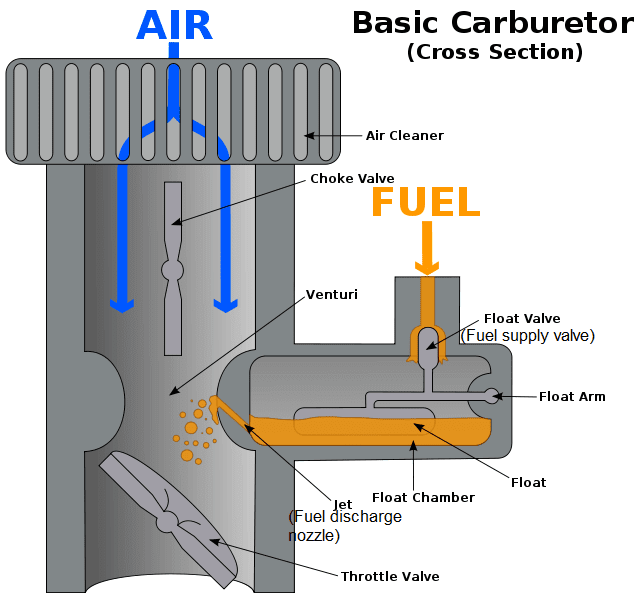 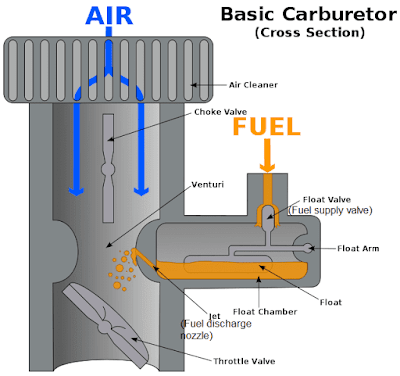 🔗What is Carburation? What are the factors affecting carburation?
🔗Types of Air-Fuel mixture- Stoichiometric mixture, Rich mixture, and Lean mixture

Carburetor is the device that used to mix air and fuel in an internal combustion engine. The main objective of the carburetor is to provide quality air-fuel mixture for cruising range and for other special requirements likes at starting, idling, acceleration, variable load, and speed operation condition. Above figure shows a simple carburetor. The main parts of a simple carburetor are carburetor air filter, float chamber, fuel discharge nozzle, metering orifice, choke valve, throttle valve and venturi.
🔗Essential parts of modern carburetor and their functions

The float chamber is vented to the upstream side of the venturi or to the atmosphere. Float and needle valve maintains the constant gasoline/ petrol level inside the float chamber. The float goes down as a result of the decreasing amount of fuel inside the chamber. When the fuel level goes down the designed level, the floats go down, actuate the fuel supply valve and admits fuel into the chamber. When fuel reached the designed level, float closes the fuel supply valve. The tip of fuel discharge nozzle from the float chamber is located to the throat of venturi. The tip will be slightly above the level of fuel in the float chamber to avoid overflow. The throttle valve is regulated by the mechanical linkage (cable) or pneumatic link to the accelerator pedal of the vehicle.

🔗Advantages and disadvantages of simple carburetor

The accelerator (throttle) of vehicle does not directly control the fuel supply. Instead, it actuates a mechanism that controls the air flow into the engine. The speed of air drawn into the cylinder determines the amount of fuel mixed in the air. The amount of charge delivered to the gasoline engine cylinder varies with varying power output (quantity governed engine). This is achieved by using a throttle valve after the venturi. When the throttle valve opening varies, the air flow rate also varies. The increase in air flow rate decreases the pressure at the throat (increase differential pressure) that make the flow of fuel vary in a similar manner. However, as the decreasing pressure at throat decrease the density of air whereas the density of fuel remains unchanged. This results the simple carburetor produce a progressively rich mixture with increasing the throttle opening.

Why atmospheric pressure effects the working of simple carburetor?