SI engine is an internal combustion engine, where the fuel is burned with the help of spark plug. SI engine working the principle of the Otto cycle. As the name suggests, in a four-stroke engine, the one cycle of combustion operation is completed in four strokes. Each stroke consists of 180° rotation of the crankshaft and hence four stroke completed in 720° rotation of the crankshaft. The engine takes two revolutions of crankshaft to complete this four stroke. The four-stroke for a spark ignition engines are


Various stroke and the corresponding position of piston and valves for a vertical IC engine, PV diagram are described below. 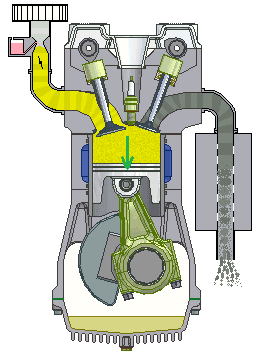 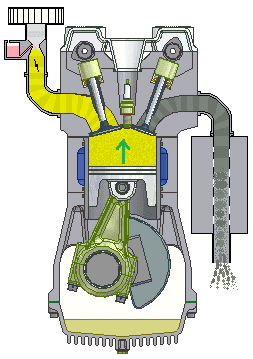 The piston moves from BDC to TDC. During this process, both the inlet and outlet valve is closed and the charge previously drawn into cylinder get compressed. At the end of this stroke, ie piston at TDC, the whole charge is compressed into clearance volume. The pressure increases with a decrease in volume. The compression ratio of SI engine is between 6 and 10. 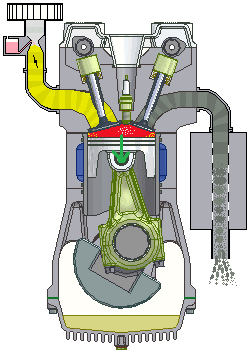 At the end of compression stroke, the charge is burned using spark plug at the cylinder head. In ideal SI engine, it is considered as the instantaneous process. The temperature and pressure inside the cylinder increase dramatically at constant volume due to the burning of fuel (process 2→3). This is the only stroke in which actual power is produced. The high pressure burnt gases push the piston from TDC to BDC. During this process, both intake and exhaust valves remain closed. In this process, temperature and pressure decrease while the volume of gas increases. At the end of the power stroke, the exhaust valve is open, the pressure drops to atmospheric pressure (process 4→5). 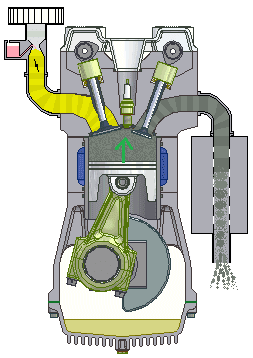 The piston moves from BDC to TDC while the inlet valve is  closed and the exhaust valve is open. The piston pushes out the burnt gas from the cylinder to the atmosphere. At the end of exhaust stroke, some residual gases get trapped in clearance volume. This residual gas gets mixed with fresh charge drawn into the cylinder during the following cycle.