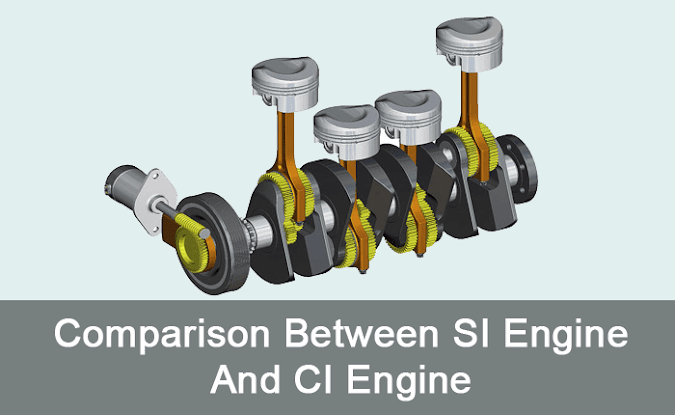 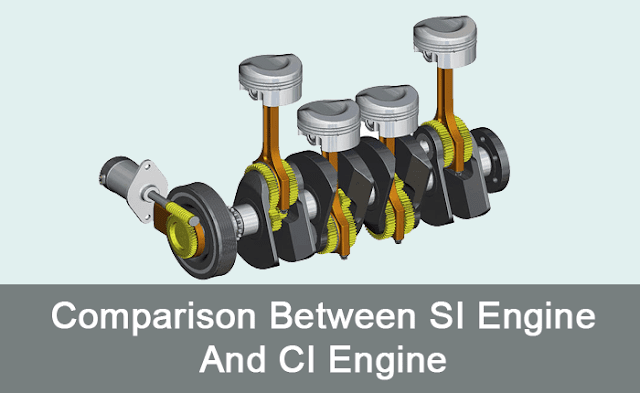 At first glance, it seems both SI engine and CI engine are completely similar, but they are working on an entirely different principle. A four stroke CI engine operating on diesel cycle (called diesel engine) and SI engine working on the Otto cycle (called petrol engine). They differ from engine design to its efficiency. Depending on working condition both have their own advantages and disadvantages. Here is the comparison of these two types of IC engines.

In both engines, the actual working fluid is the air-fuel mixture. In SI engine, the carburetor is used to blend fuel-air mixture before they entered the combustion chamber. In CI engine fuel is injected into the cylinder by fuel injector at the end of compression stroke. They are working under different proportion of air fuel. A diesel engine requires more air than a petrol engine for combustion of fuel.

The power of CI engine under varying load controlled by regulating fuel flow into the cylinder, so it is not necessary to regulate air intake. CI engine always sucks same quantity of air while working, so they don’t need special valves (Throttle flap) as the SI engine needs it.

The main difference between SI and CI engine is how they start combustion process. In SI engine, the fuel is ignited by a spark created by the ignition system (spark plug). The diesel engine has no spark plug, the fuel ignited by other means known as compression ignition. As pressure increases, the temperature of the air-fuel mixture also increase. At high pressure when the temperature reaches ignition temperature, the fuel gets self-ignited.

CI give more torque, but deliver at lower speed range. That is the reason CI engine used in almost all heavy vehicles. Petrol engine operates at high speed. They are suitable for light vehicles such as cars and bikes. CI engine takes the time to build up some speed.

🔗Difference between two-stroke and four-stroke engine
🔗What happens if I misfuel my car? (Petrol in diesel car Or diesel in petrol car)
Load comments