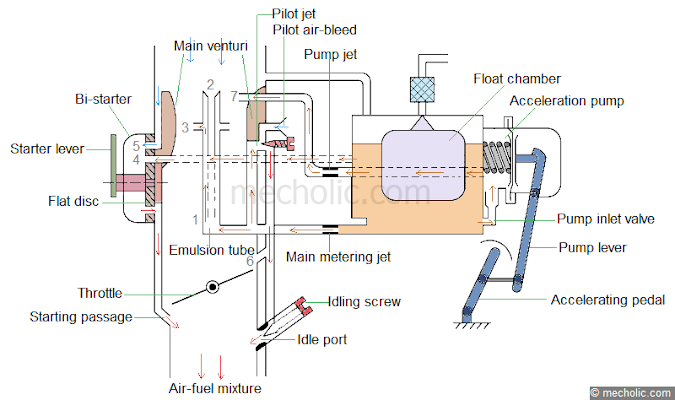 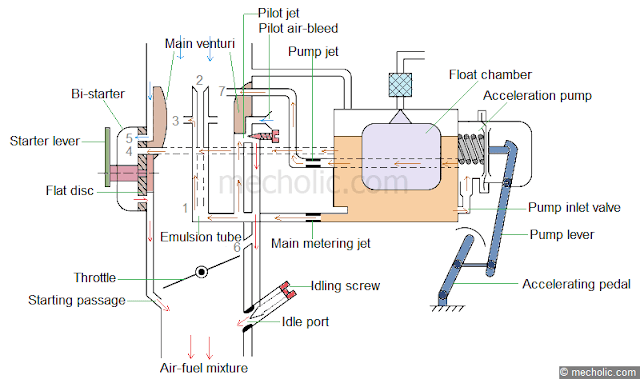 Solex carburetor is famous for its performance, reliability, and ease of starting. The figure shows a diagram of a downdraught solex carburetor. This type of carburetor has distinct fuel circuit for starting, idling, acceleration, low speed operations, etc. Provisions on solex carburetor ensure the supply of richer mixture at starting, and weaker mixture during cruising of the engine.

Bi-starter is the unique device incorporate with the solex carburetor for the easy cold starting. Bistarter valve, in the form of flat disc with holes (of different sizes) is connected to starter gasoline jet (4) and starter air jet (passage which opens just below the throttle valve at (5). The starter lever is used to positioning or shift the size of hole come opposite to the passage. Starter lever is operated by using the flexible cable from the dashboard controls.

Richer air-fuel mixture is required during starting, after starting the mixture is progressively leaned. While starting, throttle valve remains in closed position and bigger holes are positioned in bistarter. Then the whole engine suction is forced to starting passage. While suction passes through the starting passage, it carries air from air jet (5) and fuel from jet (4). The final output of starting passage is rich enough for starting.

In idling operation of the engine, the throttle valve is kept closed. The fuel flows from the well of emulsion system to the piolet jet. Fuel is then get mixed with little air through the piolet air-bleed orifice. This air-fuel mixture is then sent down below the throttle. Idling adjustment screw in this passage help to vary and set desired idling speed.

During acceleration of engine more fuel is required; diaphragm type pump is used to supply this extra fuel. When acceleration pedal is pressed, the pump connects to the pedal press pump diaphragm towards left. The diaphragm movement forces the fuel to pump injector (7) through the pump jet. When the accelerator is released, the pump lever pulls the diaphragm. The movement of diaphragm create a vacuum in diaphragm pump, and gasoline from float chamber is then sucked in to pump through the inlet valve.