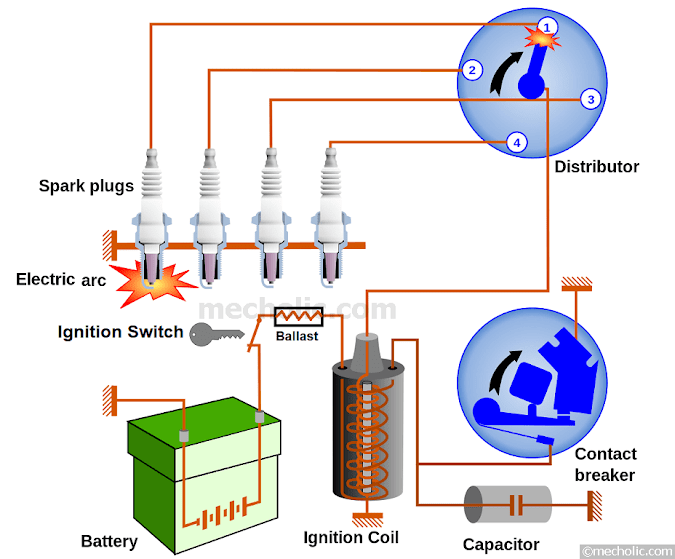 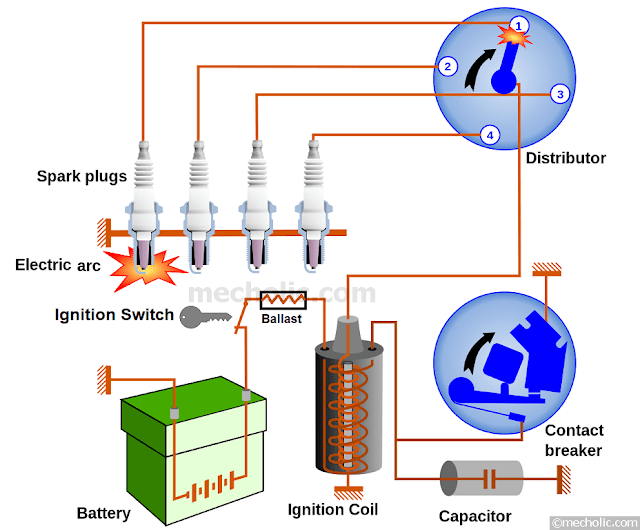 Battery is the primary energy source for the system. One end of the battery is grounded to engine frame. The other end is connected to the primary terminal of the ignition coil through ballast and ignition switch. The ignition switch is the main key to complete the electric circuit in the primary terminal of the ignition coil. The ballast is a special resistor which connected in series to the primary coils. The function of ballast to protect the coil from excessive current. When current increase the ballast resistor get heat and then get higher resistance. Which eventually reduce the current flow through the primary circuit.

The ignition coil consists of secondary coil of large number turns, it wound around over iron core. The primary coil has a few number coil and it is wound over the secondary coil. The entire coil is assembled to a compact unit. Low voltage (12 volts) current from the battery is stepped up to high voltage (10,000 volts) in the ignition coil by the principle of electromagnetic induction. The primary circuit is completed by earthling the other end of the primary coil to the engine frame through the contact breaker. The contact point of the contact breaker is held together by the spring load. The contact opens/ close according to the engine movement by using a camshaft. A capacitor is connected parallel to the contact breaker. Ignition capacitor stores the current induced in primary winding when the circuit become open. It protects the contact points.

One end of secondary coil is also grounded through contact breaker. The other end is connected to distributor. The distributor rotation switch which distributes the high voltage current to the different spark plug according to the firing order of the engine. The spark plug consists two electrodes, one is grounded and the other one is connected to distributor. This results in a large voltage difference between these electrodes and creates a spark across them. The spark is then ignites air-fuel mixture inside the combustion chamber.