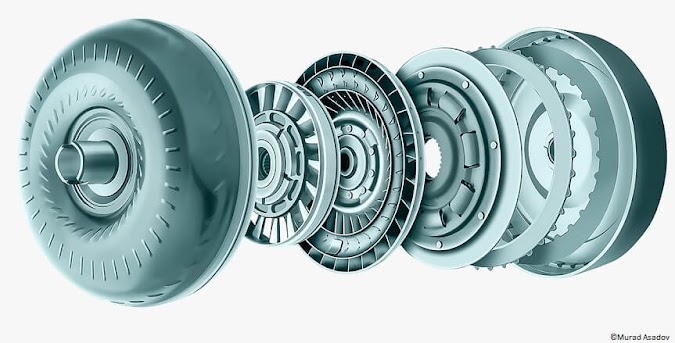 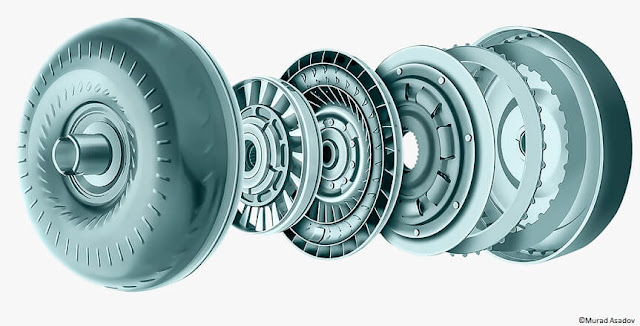 Torque converter is a type of fluid coupling that is used to transmit an increased torque to the driven shaft from a prime mover such as an engine. Torque transmitted may be more or less than the input torque. Multiply the torque is the key feature of the torque converter. The torque at driven shaft may get three times of torque available in the driving shaft. 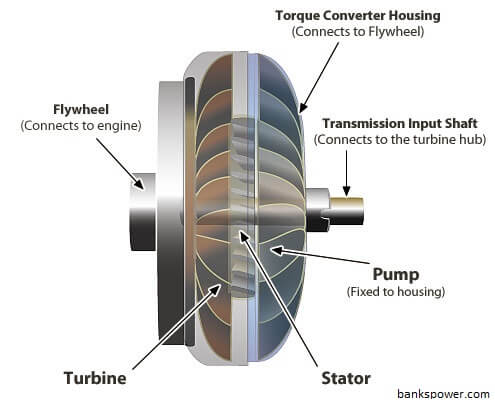 Impeller: Input part which is driven by a prime mover

Stator: stator is about one half of diameter of impeller or turbine. It is the reaction member of the torque converter. It is placed between the impeller and turbine so that it can redirect oil flow to the same direction as impeller. In classic torque converter, the stator rigidly fitted and prevent it from rotating at any condition. In practical stator is mounted on overrunning clutch that prevents counter rotating but allows forward rotation with respect to the prime mover.

Three phases of torque converter is given below
Stall: It is the phase when the prime mover applying power to the impeller, at same the turbine keep in stationary by means of mechanism like break system. At stalling the, if sufficient torque is applied to input it produces maximum torque multiplication. When brakes disengaged, there will be a large difference in the velocity of impeller and turbine. The ratio of torque is known as stall ratio.

Acceleration: There is a large difference between impeller and turbine velocity. This stage torque multiplication is less than that attained at stall phase.

Coupling: When turbine speed reaches approximately 90% its speed of impeller the torque multiplication ceases, the torque converter behaves like simple fluid coupling. In modern design, at this stage, a lock up clutch is used to increase the fuel efficiency.

In conventional fluid coupling, the oil from turbine returns to impeller opposes the impeller rotation; result is energy loss as heat. In Torque converter the oil returned to the impeller pump directed by the stator so that it aids the rotation of impellor. The result is the recovered energy and more energy available to impeller than the actual prime mover input.

The power of shaft is directly proportional to the product of speed and torque. When Torque increases, the speed of shaft should be decreases. The torque at driven shaft increases by reducing the velocity of oil, which flows from pump impeller to turbine runner.
Load comments