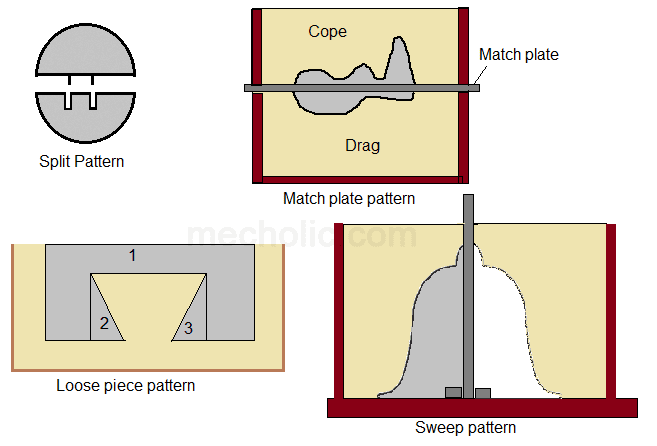 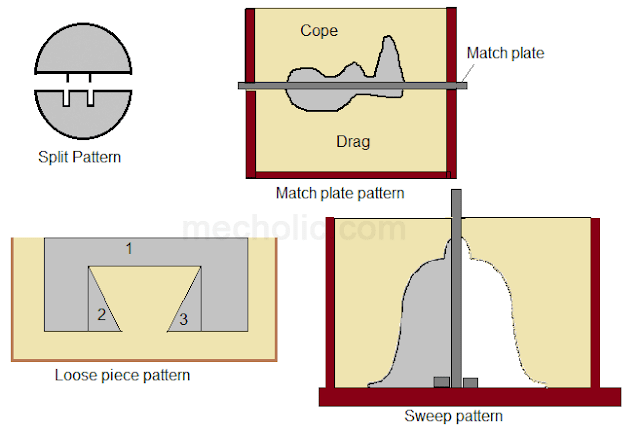 There are different kinds of patterns depending on the complexity and procedure of casting and molding. Some of them are briefly explained below.

These are the simplest and least expensive types of pattern. The pattern is made of a single piece and expected to lie entirely either in the drag or cope.

Application: These are used where the casting is simple and does not create any withdrawal problem. It is good to use single piece pattern in small scale production and Prototype development.

Many patterns cannot be made in one piece. For example, a sphere pattern cannot remove from mold cavity if it is a single piece pattern. The split pattern has two halves aligned properly by using dowel pins. Dowel pins which are fitted to the cope half precisely match the hole dug in the drag half. In this case, the split surface is same as the parting plane of mold.

Application: These are the widely used types of a pattern where it is hard to withdraw casting from the mold. Split patterns used for large casting and when the depth of casting is high.

These are similar to the split piece pattern. In addition to split pattern, it has a gating and riser system attached separately to the face plates. By using Cope and drag pattern, two parts of mold can be produced separately, and later it can assemble into one.

Application: used in high scale production, for casting which is heavy and inconvenient to handle.

This is similar to cope and drag pattern.  In match plate pattern the gating and riser systems are mounted on a single matching plate. It is used to simultaneous production of both drag and cope molds. The cope and drag flask is prepared on two sides of this match plate. The match plate is removed after molding, the complete mold obtained by joining two pieces of mold.

Application: loose piece pattern is used when the removal of other types of pattern from the mold is impossible. The mold of too complicated shapes requires a pattern that can split into small pieces. 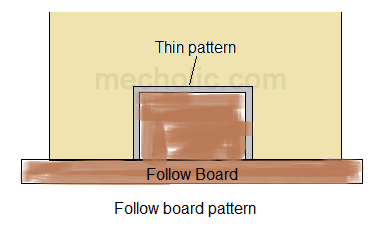 Sweep pattern is suitable when the casting is large and symmetrical about the axis (e.g., bells). A 2D pattern is used to produce a 3D mold cavity (so it is a pseudo pattern). In this type, the mold cavity is created by the complete sweep of the pattern. The advantage of Sweep pattern is that it reduces both expense and weight of pattern for the 3D object.

The gated pattern is used for mass production of small objects (investment casting). This pattern has a gating system itself. The single pattern used to create a mold having some cavity. A single gate and runner system used to feed metal to all of these cavities. It saves considerable molding time.
Load comments