What Is Riveting Fastening Process? Applications Of Riveting 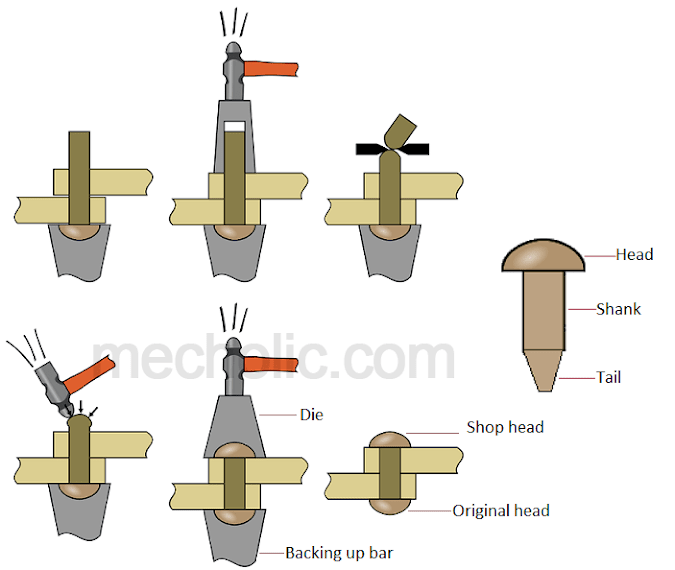 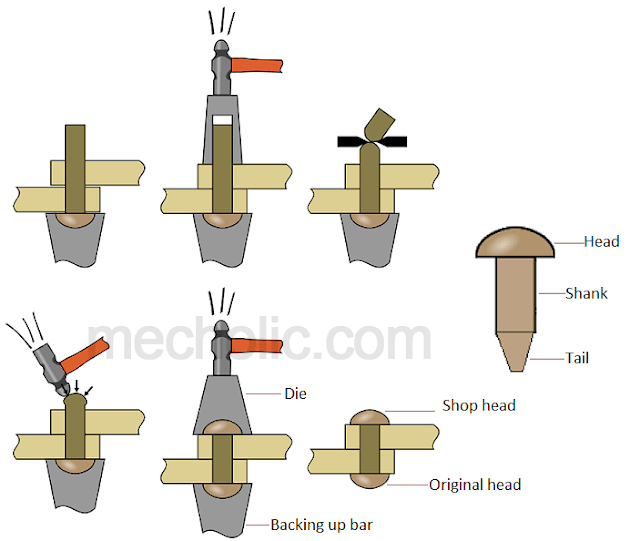 Riveting is a one of the major types of permanent material joining process used in prototype and manufacturing assemblies. The rivet is a mechanical fastener, it consists a shot cylindrical bar with head on one end. The cylindrical portion is known as the shank and the end opposite to the head is known as tail. The material of rivet is soft enough to get it bucked by normal impulse force. Rivets are a strong and effective way to make permanent fastening of plates of light metal. Rivets are more capable and preferred for supporting shear loads rather than tension loads. For tension applications, bolts and screws more suitable than the rivet.

How riveting is done?

A hole is drilled or punched in the plate needed to be riveted. The punching is a very cheap method in relatively thin plates. But for a thick-plate like pressure vessel works, punching is not suited, because it may injure the material around the punched hole. In such cases drilling is adopted to make a hole. Drilling also results more accuracy in location and size of holes. The rivet hole usually 1.5mm larger than the diameter of the rivet. Remove all the burrs and chips at the region to get tight plate joint. The rivet is placed in the hole, then the tail is deformed (upset, or bucked), so that it tail portion expand about 1.5 times of it shank diameter. In other words, the deformed tail create a new head, resulting the rivet hold plates tightly. The original head of the rivet is called factory head while the newly formed head is called shop head or buck-tail.

The riveting can be done manually by using a hammer/ bucking bar or it is done by using riveting machines like a pneumatic hammer. In hand riveting, the die set is placed on the tail and apply massive blow by hammer. this cause the shank expand, fill the hole in the die and create shop head as shown in above figure. In machine riveting, the die is a part of hammer which is operated by hydraulic and pneumatic machines.